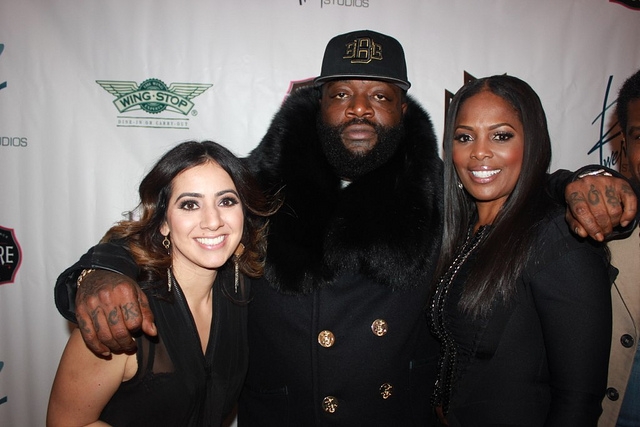 Rick Ross’ awesome team sent out private invites to the who’s who in the music industry of Atlanta and media outlets. We were so curious to hear what the Rich Forever rapper had to say as we hustled to the studio in inclement weather.  Once we saw industry faces like Catherine Brewton, Johnta Austin, Atlanta City Councilman Kwanza Hall, boss-lady Courtney Rhodes, entertainment attorney Donald Woodard and Dina Marto in the house, we immediately knew something big was going down.

Ross started his speech with the following words, “You know I am a person that’s based on family and loyalty. Signed to Def Jam by Jay-Z then pulled out of Miami by a man named Shakir Stewart, who happened to be one of the men I got closest to, then recorded my first album at Hitco in Atlanta. Then one night I called Shake and I said ‘yo I was calling you and calling your phone all night and I had these great ideas and you never called me back.’ He said, ‘Yo, if I don’t pick up my phone, call Dina.’ So I was in Atlanta one night and I asked her to call all the producers she knows and I came into the studio and there was 25 producers. ‘Wow,’ I said, ‘we have to do something special with this.’ I am happy to announce Artists First, a platform to introduce young songwriters and new writers to artists, superstar producers to artists, [and] back and forth and so forth. If we could pull together 50 producers in two-year period I said, just imagine what we could do over a 10-year span. We could make a lot of dreams come true. I am also happy to announce [that I am] launching a talent search for the new MMG artist.”